WHEREAS, it is imperative for Filipino American youths to have positive role models and to instill in them the importance of education, complemented with the richness of their ethnicity and the values of their legacy; and

WHEREAS, the earliest documented proof of Filipino presence in the Continental United States falls on October 1587, more recently published by Lorraine Jacobs Crouchett in her book, Filipinos in California (1982), annotating John Walton Caughey in his book, California (1953), and that definitive dates of written landings on the shores of California have been recorded with the earliest on October 18, 1587, according to Crouchett, annotating H.R. Wagner's Unamuno's Voyage to California in 1587 in the Quarterly of the California Historical Society (July 1923), among others;

Click on flyer to enlarge. Please feel free to download and/or print and circulate. Hope to see you all in Philly!
~Joanie 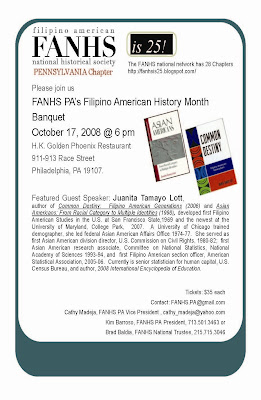 Copy/paste this link into your browser to register for #FANHS2022, the 19th biennial national conference of the Filipino American National ...