WHEREAS, it is imperative for Filipino American youths to have positive role models and to instill in them the importance of education, complemented with the richness of their ethnicity and the values of their legacy; and

WHEREAS, the earliest documented proof of Filipino presence in the Continental United States falls on October 1587, more recently published by Lorraine Jacobs Crouchett in her book, Filipinos in California (1982), annotating John Walton Caughey in his book, California (1953), and that definitive dates of written landings on the shores of California have been recorded with the earliest on October 18, 1587, according to Crouchett, annotating H.R. Wagner's Unamuno's Voyage to California in 1587 in the Quarterly of the California Historical Society (July 1923), among others;

For #fahm2014, FANHS PA will honor all Lolos and Lolas/grandparents during our October 17 gala at Joy Tsin Lau Restaurant - 1026 Race Street in Philadelphia's Chinatown, at 6 pm. Click to see flyer above and in photo in next post.

*All Lolos/Lolas pay just $25 each for discounted tickets and will be recognized as a group at the FANHS PA gala :)

*Special recognition will be given to Lolos and/or Lolas whose grandchildren participate in the FANHS PA project outlined below.

Do you want your Lola and or Lolo to be honored by FANHS PA during our Filipino American History Gala on October 17, 2014?

Then please tell us why. :)  Please send an email to forourcommunities@gmail.com or domingo.marife@gmail.com

Write:
*your name
*your age
*your Lolo and/or Lola's full name

*Why is your Lola and/or Lolo aweso…
Read more 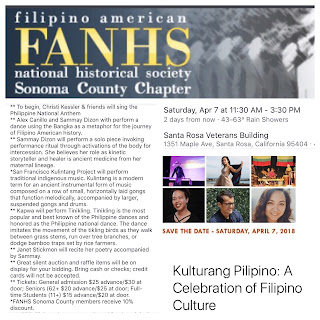